A new year has started and, like every turning point, reports on the state of the art of philanthropic giving and estimates for the future abound. But hey, you know what? It is ALL good news – some countries are even producing reports and estimates on their actual and future giving situation. For example, estimates on US giving for 2017 and 2018 are also positive, though some doubts are related to the new Presidency…

But what does it mean that giving is increasing?

First, let’s clarify what giving is. “Giving” is commonly intended as the act to give for good. You can give to people (give a coin to a homeless, give clothes and drugs to earthquake victims) or to causes (make a donation typically directly or through online fundraising platforms). Giving can be individual or institutional – as in the case of corporate donations to cultural, social or sport events. Not only you can give money or goods (including your blood!), you can also give your time – a particular type of giving, called “volunteering” (which will be specifically addressed through the use of different sources in a further post!). So, a trend of increased giving may relate to the fact that people have been more active in collecting money or goods, or in volunteering for good causes, or have increased the absolute amount of their donations or the time dedicated to others, that corporate foundations are increasing their donations out of their total revenues, or that big foundations have increased their grant expenditures to low- or middle-income countries (LMICs), and so on.

For this reason, it is interesting to delve a bit deeper into the kind of mapped giving. For example, the Index of Global Philanthropy and Remittances of the Hudson Report (last released in 2013) includes public sources of giving (US Official Development Assistance), private sources of giving (foundations, corporations, NGOs, individual volunteering, colleges and universities, and religious organizations) and remittances, as its aim was to map US overall giving to LMICs. The last report by CAF on UK giving in 2015 maps giving behaviours through a set of different dimensions, including political participation. In fact, besides the “typical” dimensions (donate money to a charity, donate goods to a charity, volunteer for a charity), other dimensions that respondents (4.160) have been asked about are: sponsor someone for a charity, buy an ethical product, sign a petition, participate in local public consultation, and participate in public demonstration or protest. Furthermore, some reports try to map only individual giving by wealthy donors in particular. Three examples: the Coutts Million Pound Donors Report, focused on the UK, maps all charitable giving which is worth 1 million pounds or more. Italy has tried its first map of donations from high net worth individuals (the report is not public), and BNP Paribas is releasing its Individual Philanthropy Index annually, with a global view.

It is not a surprise that banks and organizations working in the financial sector are interested in mapping giving trends, giving drivers and challenges. The increase in global giving is often correlated, among others, to two main reasons. First, the growth of the middle class in the world: as a new “bourgeoisie”, a wealthy, young and educated class is growing very fast in emerging economies, presenting unknown potential and challenges for philanthropy. And second, the increase of billionaires, coming from new sectors of the industry and from a wider panel of countries than in the past. With a little patience, I have used the Forbes billionaires’ list to map the increase of billionaires in specific countries, comparing the usual suspects (UK and US) to some emerging economies (the so-called BRICS). Then, I have combined those numbers with the Giving Pledgers, meaning those who agreed to sign the Giving Pledge, the initiative launched by Bill Gates and Warren Buffet in 2010, which invites the world’s wealthiest individuals and families to commit to giving more than half of their wealth to philanthropy or charitable causes either during their lifetime or in their will. The result is showed below. Though with differences, it is clear enough that there is a general increase in the number of “generous” billionaires, considering also that the Giving Pledge is a very rough measure of solidarity: several billionaires may be generous donors, even without signing such a petition. 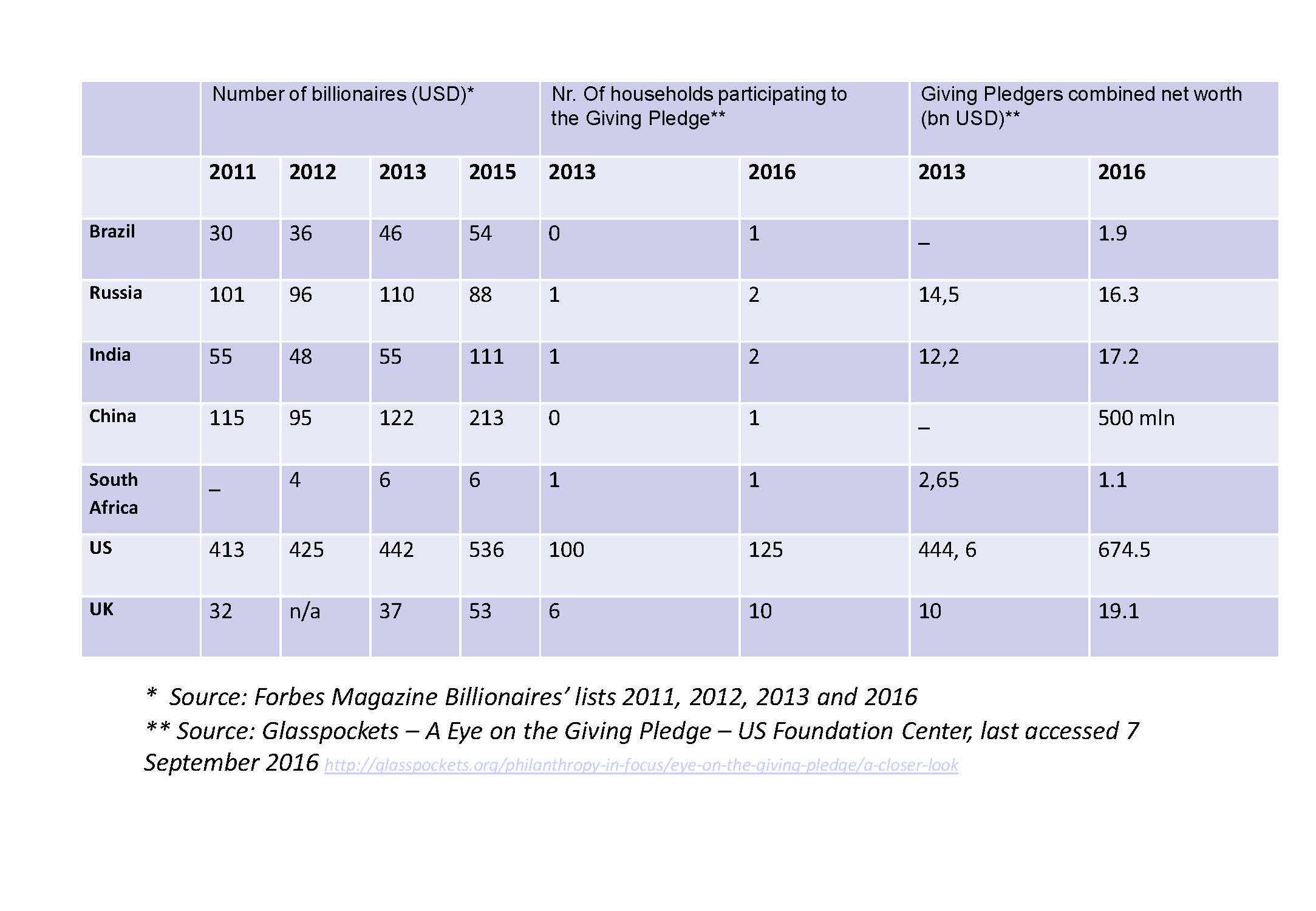 Now, do you think you need a huge amount of money or time to be a donor? You are wrong. Giving is a behavior and an attitude. And apparently, it makes you happy! If you want to be convinced, you can try this simple social experiment. Watch this video from Michael Norton, and try to replicate the experiment with your friends. It is a priceless way to have fun and to learn more about giving: there are no economic, cultural or social differences when you are just training your generosity.